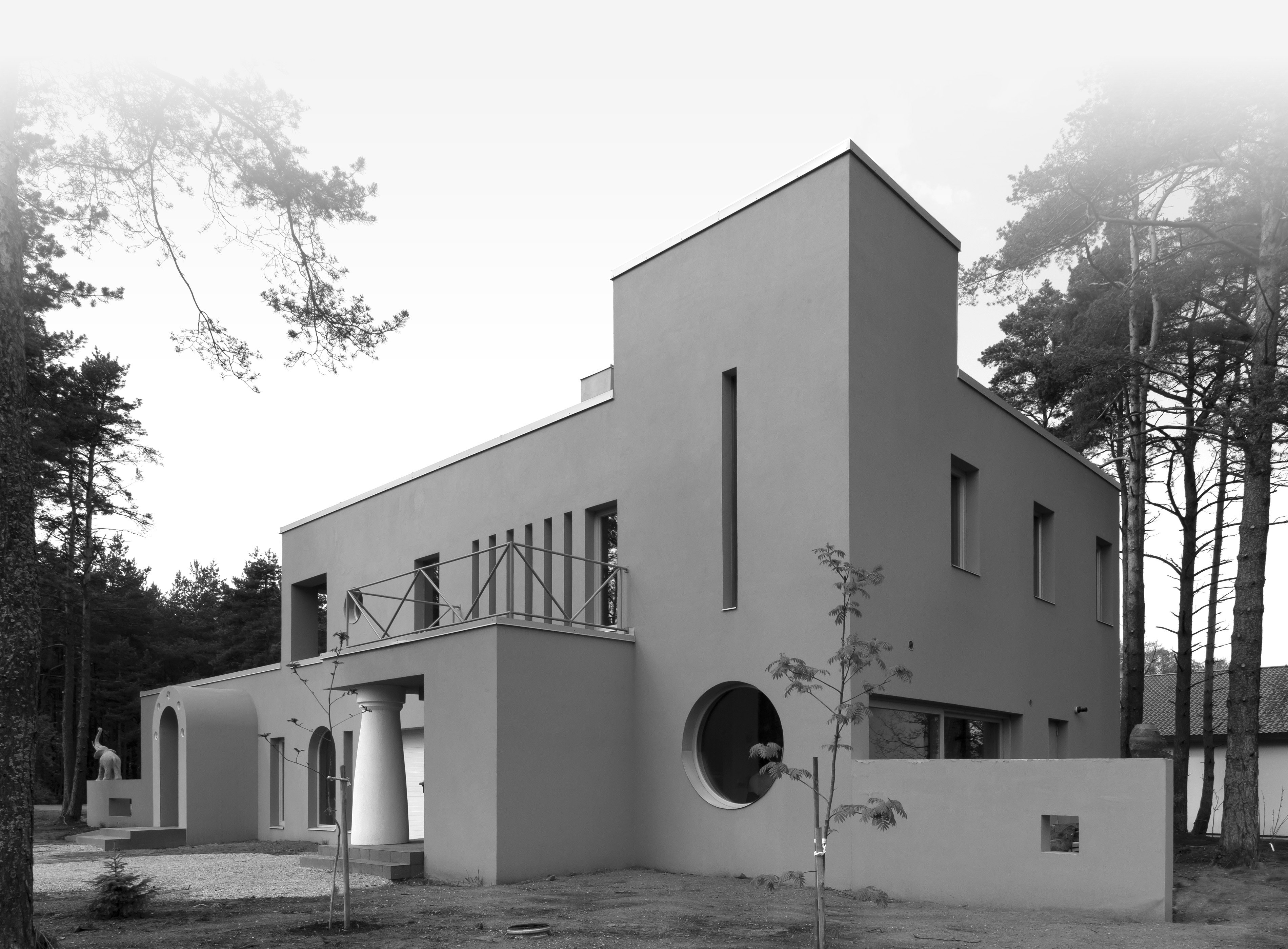 At the “Last Futurist Exhibition of Paintings 0.10” Kazimir Malevich formulated a manifesto of Suprematism – “Evolution and revolution in art have only one objective: to break out towards a unified creativity – towards a composition of signs rather than repetition of nature” (Казимир Малевич, “О новых системах в искусстве. Статика и скорость. Установление А.” – Дмитрий Сарабьянов, Александра Шатских (edit). „Казимир Малевич. Живопись. Теория”. Москва: Искусство, 1993, pp. 210–211). In his “The Principles of Modern Architecture” (1929) Yakov Chernikhov transferred this thought to the field of architecture, declaring that the latter “becomes art only when its images/creations are perceived as values of an “artistic kind”” (Яков Чернихов, “Архитектурные фантазии. 101 композиция”. Profi Grafika. Москва: 2011, p. 7.).

In the Elephant House, architect Vilen Künnapu takes a step further in the development of this architectural self-reflection. To use the language of Malevich, the project is a building consisting of architectons – primeval forms stripped of cultural references and removed from their context. However, unlike the definitions given by Malevich and Chernikhov, in this case the “blocks” are not abstract geometrical volumes, but canonical architectural forms. When we look at the Elephant House, we can see references to the pared-down volumes of Modernism, to Gothic windows, Greek porticos, ancient ziggurats, and likewise to Postmodernism (the works of Ettore Sottsass). Künnapu uses architectural heritage as a palette, stripping this heritage of context and elevating it to the level of the absolute. It is not important when and in what circumstances a particular piece of this work was discovered; what matters is the creative energy it contains. Semiotic categories here lose their value, while the different epochs to which the architect refers in his design become incredibly alike.

This building performs two functions at the same time: the ground floor contains a private medical centre (this is the clients’ field of business), while the second level is a residential space. The building is original not just aesthetically, but also functionally: this is a combination of the private and the public in which the dividing line between these concepts has been eroded.
The chromatic range of the walls is bright and varied both inside and out in a way that serves to integrate the design and cement the diversity of references and the noise created by the details. Colour also provides a way for the interior to interact with the facade: the building could easily be turned inside out. The building’s colour scheme has an organic continuation in the paintings and sculptures by the Estonian artist August Künnapu, Vilen’s son, which have been placed in the entrance hall, on the staircase, and in the doctor’s reception room. The interiors are likewise decorated with installations (Spiral Towers) by Vilen Künnapu himself; the installations refer to the shape of the mandala, which Künnapu often reproduces in his works (See: interview with Vilen Künnapu in Project Baltia, 2010, No. 3, pp. 30–32.).

The way in which art and architecture interact in this project becomes an internal dialogue in which the builder and organizer of practical life is simultaneously the creator of a powerful creative energy, which is released when an open source of culture is tapped.